HAVING LIFE-SAVING COVERAGE SHOULDN’T DEPEND ON THE STATE THAT YOU LIVE IN.

The Southerners for Medicaid Expansion continues to urge federal leaders to take immediate action to expand healthcare coverage to nearly seven million people across the South.

May 18, 2022 - Urging Majority Leader Schumer to close the Medicaid coverage gap as a necessary step for economic and racial justice. 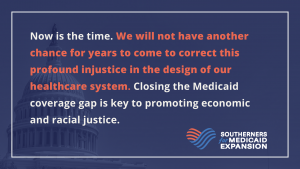 Read our past Letters

We, the Southerners for Medicaid Expansion coalition, lead health equity movements across the Southern states that have not expanded Medicaid. We are joined by nearly 400 organizations: advocates from non-expansion states and leaders for health and racial equity across the nation.

We are urging you to prioritize the permanent and comprehensive Medicaid “coverage gap” policy outlined in the House Energy and Commerce Committee reconciliation bill.

Closing the coverage gap would mean that over two million uninsured Americans—most of them Black, Latino, Indigenous, and Asian, all of whom live below the poverty line—could finally get health coverage. This is the only health care policy in the Build Back Better Act that directs resources specifically to low-income Americans, 60% of whom are people of color, who have no other pathway to coverage. We ask you to count it among your highest health care priorities.

We cannot ask Americans to keep waiting for this basic human right—nor can we settle for a solution that will lapse in a few years or leave some Americans behind. That is why our organizations urge you to support the House’s permanent and comprehensive policy.

This is not just about health care. It is a matter of racial justice.

The legacy of slavery has always been reflected in the design of Medicaid—in who has received it, and who hasn’t. While its sister program, Medicare, was created at the federal level to reach every senior in America, Medicaid was a concession made to former slave states.[1] Instead of being universal, it let states decide whether to participate and who could and could not get coverage. Southern states went out of their way to disqualify as many Black Americans as they could, an agenda reflected in their Medicaid policies to this day. It is no coincidence that eight of the twelve non-expansion states are former slave states.

This is why the Leadership Conference on Civil and Human Rights has called the coverage gap a “test of [Congress’] commitment to racial equity.” It’s why leaders of the Congressional Black Caucus and Congressional Hispanic Caucus wrote that closing the coverage gap quickly, permanently, and comprehensively is “one of the single most important steps” we can take to address racial inequities in health care. And it’s why Black leaders from Stacey Abrams to Rev. Barber of the Poor People’s Campaign have joined our call.

The Affordable Care Act—championed by so many Democratic leaders—intended to correct this injustice by expanding Medicaid to every low-income American regardless of where they lived. But since Southern states successfully brought NFIB v. Sebelius to the Supreme Court, Medicaid expansion has been left up to the states.

After nearly a decade of fighting for Medicaid expansion, we know the political landscapes of our states all too well. We know that to finally fulfill the promise of the ACA, we will need bold action from Congress.

That is why we are urging you to correct this deep, historic injustice by closing the coverage gap once and for all. Congress may not have another chance to do so for years, if not decades. In that time, tens of thousands more low-income people of color will die from treatable illnesses and millions more will suffer. The risk is too great.

We are grateful to you and your colleagues for your leadership on this bill, and we are eager to work with you in the coming weeks to close the Medicaid gap once and for all.

Read our past Letters

Our communities have suffered far too long in the coverage gap. They are parents and youth, cooks and teachers, caretakers and essential workers. For too many, this is a matter of life and death. The White House included a coverage gap fix through 2025 in the Build Back Better framework - now we need to raise our voices to ensure the coverage gap fix becomes law. Contact your member of Congress now!

Click below to send a tweet to the President & Congressional leaders demanding that they provide a coverage solution now!